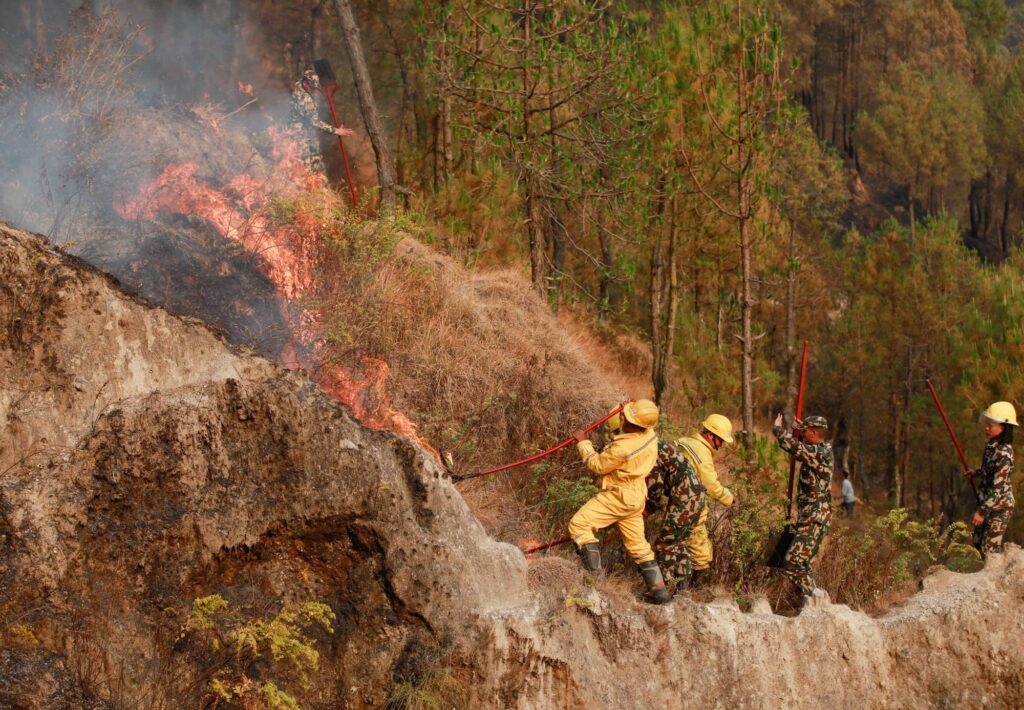 DANG, Nepal, April 13 (Thomson Reuters Foundation) – In the eight years that Basudev Pokharel has worked as a forest guard, he has rarely seen a fire as huge as the one that raged through his village in western Nepal in March.

Hundreds of such fires have been spreading across the country since November, in the worst wildfire season Nepal has seen in a decade.

The night the blaze reached Pokharel’s village of Sungure, in Dang district, a neighbor woke him to warn him.

“We tried to control the fire, but it spread so rapidly that we were helpless,” the 55-year-old recalled.

“The fire came very close to my house and burned all the hay that I had piled up to feed the animals. Luckily, I could save my house.”

The government sent a fire control expert to direct the villagers as they tackled the blaze, and by the next day it was out – but only after destroying more than 80 hectares (198 acres) of the forest.

“That night, I couldn’t sleep the whole night,” Pokharel said, as he worried that another fire would make its way to Sungure – one the villagers could not fight.

As large swathes of Nepal and some northern parts of neighboring India continue to burn, the smoke and ash have caused air pollution levels to spike, with experts warning increasingly frequent droughts linked to climate change could make massive wildfires more common.

Pokharel said the fire reached his village through the surrounding forest, where a lack of significant rainfall for the past six months has left leaves tinder dry.

Villagers say the fire has been a disaster for the 460 households who live near the forest and rely on it for food and fuel, in a country that prides itself on its community-managed forests.

“Many people here depend on firewood as their cooking fuel and much of it has been destroyed by the forest fire,” said Bimal Kumar Bhusal, one of the villagers.

“We are also going to face a shortage of grass (for animals) as it has all been burned down,” he added.

According to Bijay Raj Subedi, a forest officer in Dang, wildfires in Nepal are most often caused by humans, either internationally or by accident, such as when a cigarette is carelessly discarded.

Villagers regularly set fire to trees to create charcoal, to scare animals out of hiding so they can hunt them, or to clear areas in the hope of encouraging the growth of mushrooms or new flushes of grass.

But an unusually dry winter this year has meant smaller fires can more easily spread out of control, Subedi noted.

“There had been almost no forest fire incidents in Dang last year, as we had good rainfall,” he said, adding that this year there have been more than 20 major forest fires in the district.

Figures from the Department of Hydrology and Meteorology show there has been about 15 mm of rain in Nepal this winter, 75% less than average.

According to Nepal’s disaster risk reduction agency, more than 2,700 fire incidents were recorded between mid-November 2020 and the last week of March, a time period that covers most of the dry season.