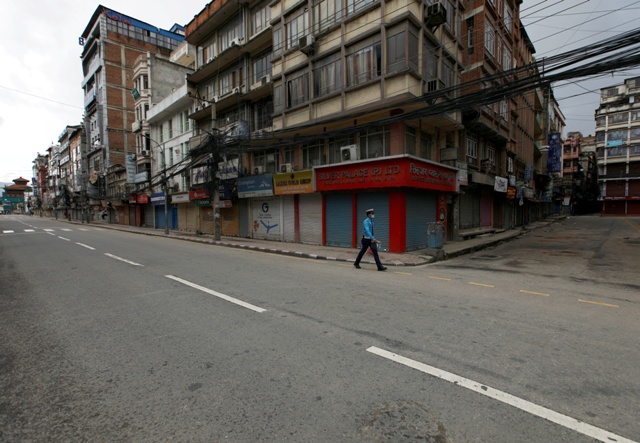 Sabita Ghimire, 29, originally from Musikot Municipality in Gulmi, used to make a living as a daily wage worker in the Kupandole area of Lalitpur. A mother of two children, she was working as a part-timer at a fast-food restaurant in the mornings and washed dishes at a house in the afternoons.

The restaurant, where she prepared ingredients for fast food, has been closed since April 29 after the government imposed prohibitory orders to stem the spread of Covid-19. She lost her morning job the day the eatery was closed. The restaurant owner has said she will be called back when the restaurant reopens. But they don’t know when.

But her day job as a dishwasher was continuing even after the imposition of the prohibitory orders. However, since last Saturday, she along with her younger son developed a fever and dry cough. After knowing about her illness, the family where she worked asked her not to come until the pandemic was over.

Her husband who used to work as a security guard at a corporate house has been staying at home on unpaid leave after the office was closed due to the prohibitory orders. “All our income sources have stopped,” Ghimire, who lives in a rented room at Kupandole, told the Post. “We don’t have enough savings even to buy food for a few more days, not to talk about the treatment. More than myself, I am worried about my son,” she said. The Ghimire family pays Rs 5,000 in rent alone.

A sharp spike in the coronavirus cases prompted the government to impose the prohibitory orders as an attempt to break the chain of transmission. The decrease in the mobility of people certainly helps lessen the spread of the contagion but it also stops most of the economic activities and as a result, the people working in the informal sector, like Ghimire, suffer the most.

An assessment by the United Nations Development Programme last year had found that 60 percent of the employees in the micro and small businesses had lost their jobs while they saw a fall of 95 percent in average monthly income during the lockdown. The report showed the tourism and the hospitality industry where Ghimire was engaged suffered the most.

It showed that the crisis affected women, especially from lower-income groups, differently than men. According to the report, 28 percent of men lost their jobs during the lockdown compared to 41 percent of women.

No source of income means, neither will they get to feed themselves and their children properly, nor will they get to afford the health services and education for their children, according to human rights activists. Ghimire, for instance, hasn’t gone to the hospital for their checkup as she knows the government hospitals, which are cheaper, are already overwhelmed with Covid-19 patients and she can’t afford treatment at private hospitals.

“The pandemic has an overarching effect on human rights,” Gauri Pradhan, a former member of the National Human Rights Commission, told the Post. “The people have been deprived of their fundamental rights to health, education, and even livelihood.”

Various reports have suggested that a significant number of people would slip into extreme poverty due to the pandemic. In its report in September last year, UNICEF said the number of Nepali children living in poverty rose from an estimated 1.3 million before the pandemic to about 7 million in August last year. “Many of these children are suffering from multiple deprivations including a lack of access to nutritious food and to an education,” it said.

That people are dying in lack of oxygen supply or beds at hospitals is a very unfortunate situation, according to Pradhan. There were reports last year that a person died of starvation after he lost the source of income. Similarly, different reports show millions of students were deprived of their right to education last year.

The students couldn’t engage in the teaching-learning activities as the virtual learning platforms were either non-existent or ineffective. The situation is no different even this year. “Nepal has guaranteed several rights of the citizen as the fundamental rights while it is also a party to a majority of international human rights conventions,” Pradhan said. “The state has an obligation to fulfill them.”

Human rights defenders say it is true that even the developed nations have borne the brunt of the pandemic. But they learned lessons in the first wave and prepared themselves for the second wave but the Nepal government wasted crucial time and did nothing to improve the health and economic sector among others.

“People from the poor and marginalized communities suffer the most during crises. The pandemic has proved that,” Mohna Ansari, a former member at the National Human Rights Commission, told the Post. “The government should have come up with special programmes for such communities, but it didn’t.”

Over 70 percent of the country’s population earn their livelihoods in the informal sector.

Among them is Ganesh Nepali, 40, who lives in a squatter settlement at Sinamangal, Kathmandu. Nepali is a painter and mason. However, there is no work after the government imposed the prohibitory orders. “I spent my savings (Rs100,000) for the treatment of my wife who is suffering from nerve compression,” he told the Post. “We have almost run out of food and I don’t have any money left. Also I need to look after my ailing wife,” said Nepali.

Unlike during the first wave of the pandemic, the government hasn’t brought a relief program to provide food to the vulnerable communities. Although a few social organizations have been providing free meals at public places, many people don’t have access to such relief.

Human rights defenders say the government in the name of focusing on health care has forgotten its other duties like feeding the hungry.

They say the situation would have been much better had the government paid more attention to preparing itself for the second wave of the pandemic instead of wasting time in political infighting. “History will evaluate the performance of the present government,” said Pradhan. “However, in these times of crisis, there should be a collaboration among the local, national and international agencies to lessen the hardships faced by the people.”