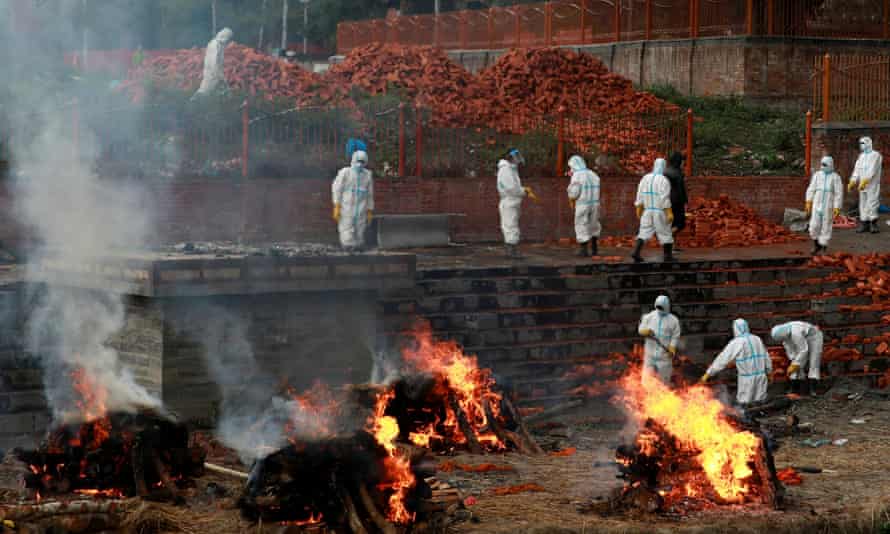 Nepal is struggling to contain an explosion in Covid-19 cases, as fears grow that the situation in the Himalayan country may be as bad, if not worse, than in neighbouring India, with which it shares a long and porous border.

Following warnings by health officials earlier this week that the country was on the brink of losing control of its outbreak, Nepal has appealed for urgent international help.

As the country reported its highest daily number of new infections – 9,070 – the prime minister, KP Sharma Oli, who has been criticised for his handling of the crisis, asked the army to help manage emergency facilities to take pressure off the health system.

With vaccines running short and hospitals overwhelmed, serious outbreaks have hit both the capital, Kathmandu, and the south-west and west of the country. The national positivity rate – the percentage of tests that come back positive – is being reported at a staggering 47%. Rates are even higher in some locations.

Earlier this week Oli appealed to the international community for vaccines as officials warned that those who had already received a first dose of the AstraZeneca jab were in urgent need of second shots.

The government’s haphazard vaccination campaign, with people queuing for hours in the capital, has been blamed for spreading the disease.

Amid new lockdowns and the cancellation of most international flights, travelers told of checkpoints in Kathmandu en route to the airport.

One of the worst-hit areas outside Kathmandu has been the city of Nepalgunj in the Banke district, close to the border with the Indian state of Uttar Pradesh, which experienced a sudden influx of thousands of returning Nepali migrant workers from India ahead of the closure of the border between the two countries.

“We need to act now and we need to act fast to have any hope of containing this human catastrophe,” said Alexander Matheou, the Asia Pacific director for the Federation of Red Cross and Red Crescent Societies.

Netra Prasad Timsina, the chair of the Nepal Red Cross, said: “What is happening in India right now is a horrifying preview of Nepal’s future if we cannot contain this latest Covid surge that is claiming more lives by the minute.”

Nripendra Khatri, of Catholic Relief Services, described the situation and the difficulties hampering Nepal’s own response to the crisis.

“In Kathmandu, many people are staying home now because of how fast the virus is spreading. At the same time, there are long lines in hospitals and pharmacies.

“Because of the lockdown in major cities, access to transportation and medicines is also affected. Cremation centres around the country are filling up fast, and family­ members are unable to properly perform last rites.

“Nepal is a difficult place for logistics, especially for specialised medical equipment. Our country is landlocked and supplies often come overland from India, but right now India needs all of its medical equipment.

“That means everything must come through airports, and all commercial flights have been suspended except for two flights a week to Delhi, India. Once supplies reach Kathmandu they have to fan out – across a country of mountains.

He added: “Many places are only accessible on dirt roads or by foot. Responding to this crisis and ensuring remote villages have access to tests and supplies will be a massive undertaking.”

With fewer doctors per capita than India, and a far weaker health system, cases in Nepal in the last month have increased from about 100 a day to more than 8,000.

The country of about 30 million people has only about 1,600 intensive care beds and fewer than 600 ventilators for its population. There are 0.7 doctors per 100,000 people, a lower rate than India.

Like India, the Nepali government allowed a series of major religious festivals to go ahead, including Pahan Charhe, which helped the spread of the disease.

Reports in Nepali-language media have alleged that the government’s belated and opaque attempts to procure vaccines from the Serum Institute of India were conducted via middle men in exchange for hefty commissions.

Most government-run hospitals are overstretched, and many poorer people have been unable to afford private care.

“It’s like we are in a war zone,” Dr Sher Bahadur Pun, the chief of the clinical research unit at the Sukraraj Tropical and Infectious Disease hospital in Teku told the Kathmandu Post, adding that patients were being treated on the floor and courtyard.

In a stark indication of the crisis, Nepal’s ministry of health conceded in a statement last week it was losing control of the situation. “As the number of infections has increased beyond the control of the health system, it has become tough to provide hospital beds for care.”