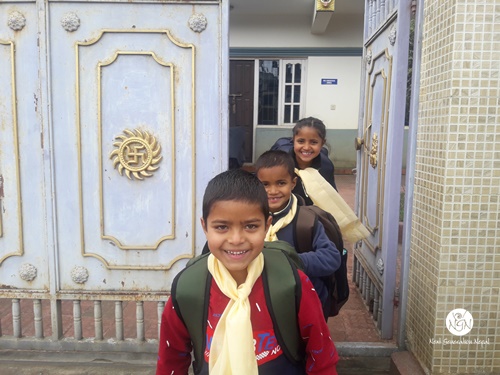 As COVID-19 has spread throughout the world, Nepal has not been spared by this pandemic. Though, there are only two confirmed cases as of today, there are almost certainly many more. Considering this fact, Nepal has been completely locked down as of March 24, 2020. NGN’s teams are working from home, and we are ensuring remotely that all the children we are monitoring are safe with their families. Having received two rescues in the month of February, we are currently in the process of reconnecting the children with their families. Despite the fear of COVID-19, we have seen families brave this new unknown and come to Kathmandu to see their children and take them home where hopefully they will be safe.

Dristi and Bipin were rescued from an illegal orphanage in Kathmandu. These children are originally from Humla, a remote mountainous region of Nepal. The family was persuaded by a trafficker to send their children to Kathmandu for a better education. After the children were brought to Kathmandu, they ended up in an illegal orphanage where they were beaten, starved and forced to do domestic work in the house and not allowed to go to school. Unfortunately, the situation was unbearable and the children’s only option was to run away from the orphanage.

Of course, they knew nothing about the area they were in and had no place to go.  They would be alone on the streets with no food or shelter. Fortunately, they were intercepted by the police who rescued them and placed them under NGN’s care until their families could be found. The NGN teams listened to their stories and in time discovered the names of the villages that they were from and immediately sent teams to these areas to find their families.

The “reconnection” process includes meeting with their families and most importantly explaining to their families what horrors their children experienced while held captive in the house they were being kept in.  They were shocked by the stories and were very upset that they had been tricked by the trafficker. The parents felt guilt and shame for having let their child be taken, but they had only their highest hope that they would be provided everything that had been promised to them.

The parents immediately made their plans to come to Kathmandu to bring their children home.   Unfortunately, the pandemic had arrived in Nepal and with it came the Lockdown before they were able to make the journey to get their children. The children waited excitedly to see their parents again, but it would not be as immediate as they had hoped.  A relative who was living in Kathmandu was contacted and was able to meet the children just 3 hours before the lockdown and head back to the village safely.

These children were held captive for more then six months, but for them it seemed it had been years of separation!