Voluntouring is not a vacation 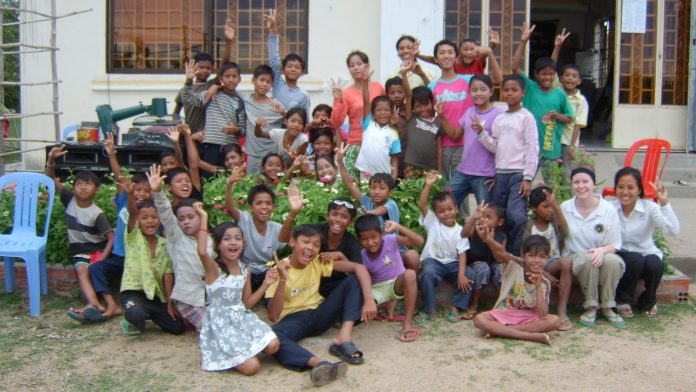 What springs to mind when you hear ‘volunteering abroad’? For many, it is Western teenagers taking selfies with smiling children in ‘Africa’, enjoying the fact that they’re having an ‘authentic’ cultural experience and improving the lives of the less fortunate.

My first experience of this was in Ecuador. I was sixteen, and had signed up to a month-long World Challenge expedition, which mixed tourism with volunteering in a local community. I’d had to fundraise to pay the (significant) costs involved – two years’ worth of bake sales, tea and coffee events, and any odd jobs I could get my hands on.

The week-long volunteering project took place in a remote cloud forest community, where I and the other students helped to build sustainable toilets and taught English at the local school. During the course of this week, I distinctly remember thinking how unqualified and unprepared we all were – out of 13 students, only one could speak Spanish at even a basic level, and none of us had the faintest idea how to build a compost toilet. Most of the time we spent ‘volunteering’ was spent waiting around for the local people to (try to) communicate what they wanted us to do, which translated into basic jobs – moving wood and digging out trenches. Not exactly something that required us to fly halfway around the world to facilitate – let alone each raise and spend nearly four grand to be there.

I didn’t know it at the time, but my expedition was a prime example of ‘voluntourism’ – a form of travel that couples volunteering with travelling abroad to an exotic country. Many choices lie open to the volunteer – be it helping out at an orphanage in Malawi, teaching English in Cambodia and thousands of other opportunities around the globe. Every year, over 1.6m people travel abroad to volunteer, and it is very popular with under-25s, especially from high-income backgrounds.

With such a large demand, a wide range of organisations have sprung up, offering a variety of opportunities around the globe – with one thing in common; questionably high fees. Over 85 organisations in the UK exist (the majority being for-profit) with the average cost of their volunteering programs reaching over £1k – often not including flights, vaccinations or travel insurance. No wonder it’s considered one of the fastest growing sectors of the travel industry, worth an estimated £2bn per year.

However, voluntourism is currently mired in controversy. Some argue the presumption that young unskilled Westerners will be an asset in a development project disturbingly echoes the colonial attitude of the ‘white saviour’. It has reached a point where some communities in the developing world have begun to refuse or ban international volunteers, and closer to home JK Rowling has warned against volunteers, arguing that they perpetuate abusive practices in orphanages. In theory, the concept of voluntourism should be effective – volunteers are providing financial and physical support to development projects overseas. So what is going wrong?

The focus of voluntourism is often on the volunteers’ experience, in favour of the actual development project. This is down to the fact that these ‘voluntourists’ are paying for the opportunity to be there – so they treated more like customers. This has an impact on the range of projects available, as research has shown volunteering with ‘orphans’ has become so popular amongst voluntourists that orphanages are beginning to operate more like businesses than charities, depicting children in poor conditions to attract volunteers. Data from ReThinking Orphanages – a campaign against orphanage voluntourism – has estimated that 8m children worldwide live in orphanages, but up to 90% of these children still have a living parent. Children are being intentionally separated in order to meet the high demand from Western volunteers in search of an ‘authentic experience’.

International campaigns supported by NGOs and ethical tourism experts have had some success in reducing this particular strand of voluntourism, leading to governments such as Australia banning it. However, they have had little success in pushing for further regulation of the sector, with few blanket requirements or universal standards applying to the industry (while many apply to domestic volunteering). This can have extreme consequences, as volunteers often lack the skill set required for the projects they embark on. Students fresh out of college are unlikely to know how to lay bricks, dig wells or teach English to a class of 30 students in an unfamiliar language – yet provided they have a few grand spare, they’re welcome to travel abroad to do just that. We wouldn’t let volunteers work on a domestic project that they are under-qualified for – yet there is a double standard for volunteering abroad.

Some would argue that despite their lack of skills, volunteers are beneficial regardless as they are there for free. If volunteers did not crowd out local labour this would be the case, but sadly this is rarely true. Organisations are unlikely to employ local workers when they have volunteers who will pay for the privilege (regardless of their difference in skill). Many studies and anecdotal reports highlight that projects take longer and cost more if they are staffed by unskilled volunteers – especially as they may require supervision. This can even result in volunteer labour impeding a project’s success, as Pippa Biddle recounts of her experience in Tanzania – “turns out that we were so bad at the most basic construction work that each night the men had to take down the structurally unsound bricks we had laid and rebuild the structure”. The money that voluntourists bring is often prioritised over their actual capabilities, with potentially disastrous results.

By and large, voluntourism can come from good intentions, with the aim of supporting those less fortunate. The reality is that there is poverty and suffering everywhere, not just in the developing world. Many voluntourists cite ‘making a difference’ or ‘giving back’ as part of their motivation, but with a recent UN report claiming that the UK is lagging behind the developing world on child poverty and inequality stats, why is there not a similar enthusiasm for domestic volunteering? Partly this is down to stronger regulation of the domestic sector, but there’s something more at play. Some NGOs have referred to these voluntourists as ‘slum tourists’, pulled towards a mirage of glamour associated with seeing poverty first hand in the developing world – having ‘an authentic experience’, as the stereotype goes – not to mention the bragging rights earned from social media posts documenting their ‘altruistic’ endeavours.

If volunteers really wanted to make a difference, their money could be more effective if donated to charity, right? Organisations could use it to hire local labour to complete the same projects, and this would be more cost-effective and better for the local economy. However, in some cases even global charities fall short. For example, the Red Cross were criticised for their work in Haiti after the earthquake in 2010, spending $500m they raised in donation ineffectively, with little reaching those it was intended for. If international charities can get it wrong, where does that put voluntourists? With volunteering abroad potentially doing more damage than harm, this can leave those who genuinely want to make a difference exasperated and defeated, left with many questions which are hard to answer, even for those who have made the study of development their career. So how can people best make a difference?

In fact, the most effective way is the one which seems most counter-intuitive – to be a tourist. Tourism makes up a significant proportion of the economies of many developing countries, for example in Cambodia, where it comprises 15% of total GDP. By travelling to these countries and spending money in a way that supports the local economy – for example ecotourism initiatives that protect the environment and provide local jobs – tourists can make a difference whilst experiencing a new culture and environment, just as voluntourism purports to do.

At its best, volntourism is less effective and more costly than providing communities with the support they need, while at worst it’s exploitative and perpetuates colonial-era attitudes. It’s difficult to judge where programs lie on this scale, as voluntourism operators often market their placements to sound as critical and sustainable as possible. Regulation from governments is practically non-existent and would prove difficult to implement due to the varied nature of the sector, so in the end it’s down to us as customers to do the research to ensure that our money is used effectively – whether that’s through volunteering abroad, donating to charity or supporting local economies whilst travelling.

Hopefully it won’t take you as far as an Ecuadorian rainforest to realise that volunteering abroad is not as charitable as it may seem.