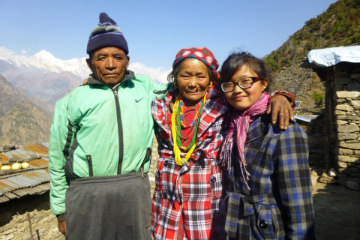 Released from an exploitative orphanage, a trafficked 14-year-old girl reconnects with her family after eight years.

Image: Zarina with her grandparents | © Next Generation Nepal

Like many children in Nepal, 14-year-old Zarina was sent to Kathmandu in 2004 on the promise of a better education than could be offered in her small rural village in the mountains. And, like many children in Nepal, Zarina ended up in an orphanage, which limited her access to her family and encouraged her to lie about the existence of parents, despite efforts by her father to meet with her.

In December 2012, Zarina was released from this exploitative orphanage, along with 19 others, and moved to a transitional home where the work of finding her family began. Zarina was aware of where she was from as a result of a meeting with her father, who came to Kathmandu after a long search for her. It was the first time they had seen each other in eight years.

Last month,  Zarina and NGN’S Reintegration Manager, Sandup Lama, made the arduous journey to meet Zarina’s family, a journey of many hours by bus and Jeep followed by a six-hour trek in the Himalaya.

Zarina relished her visit with her parents and grandparents. She sang, she danced, she prayed and she even reacquainted herself with the local language. Two nights in her home village allowed Zarina to reconnect with the family she missed very much, and also provided a sense of community and local identity that was denied her for so many years.

Now this 14 year old, so full of smiles, is on the road to a better, stronger and healthier relationship with her family and her community, and she has shown wisdom and strength beyond her years to begin this journey. We will continue to work with Zarina and her family to ensure a happy and healthy reintegration over the coming months.

Reconnecting Zarina and 19 other girls with their families is part of NGN’s ongoing work with partners Forget Me Not and The Himalayan Innovative Society.

If you are inspired by this story please consider donating to NGN’s ongoing work to reconnect trafficked children with their families.