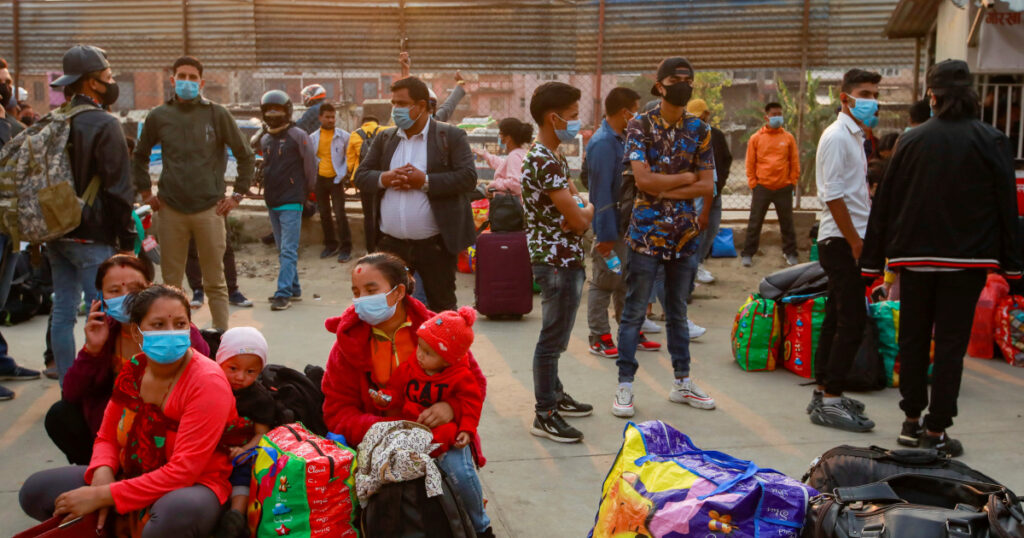 When Kabita Sigdel learned on Tuesday evening about the government decision to extend the prohibitory orders in Kathmandu Valley with more restrictions and big fines, she hurriedly jotted down a list of essentials she needed to stock up on for a week.

On Wednesday morning, she left her flat at Kupondole at 7:30 for shopping and it was already 9 am when she was back. But she couldn’t buy all the items on the list.

“I had to stand in queue for nearly an hour to buy the daily essentials and another half an hour for green vegetables,” said Sigdel, 37, who lives in a six-member family that includes her husband, two children, and parents-in-law.

“This morning, all the grocery shops were crowded. I had 10 items on the list, but when my turn came, the shop had already run out of sunflower oil and red pulse,” said Sigdel.

She returned after the shopkeeper assured that oil and pulse would be available on Thursday.

When Sigdel returned home she was more worried, fearing Covid-19 infection because the shoppers were not maintaining social distance. “And everyone seemed to be in a hurry and was jostling for essentials,” said Sigdel.

Sigdel’s is a representative case of how panicked people have become with the new prohibitory orders.

Dr Baburam Marasini, former director at the Epidemiology and Disease Control Division, called the new orders idoitic as they have caused unnecessary crowding and shortages in the market.

But Kathmandu’s chief district officer Kali Prasad Parajuli says the new restrictions are in line with the new Covid-19 Crisis Management Ordinance and introduced with the sole aim of controlling the pandemic.

But Marasini fears infections in the Valley could go up again.

“In the coming two weeks, Covid-19 cases could rise in the Valley because of the crowding in the market caused by the government’s idiotic decision,” said Marasini.

Sunil Dahal, a grocer at Kupondole, said he had never seen his shop so crowded in several months. “People are panicked by the suddenly announced new restrictions. I am not sure if they will allow me to open my shop from Friday,” said Dahal, 30, who has been in the business for the past seven years.

“The decision to close the groceries is absurd and it should be scrapped,” said a customer, who was in a queue at a mart in Bakhundole on Wednesday morning.

The infection rate in Kathmandu Valley has been gradually slowing down in recent weeks.

Two weeks ago, on May 11, Kathmandu Valley had reported 3,607 new infections. On Tuesday, 2,613 cases were recorded and on Wednesday the number of new cases in the Valley had come down to 1,493, according to the Health Ministry.

With the number of cases falling, health experts say there was no need for the authorities to further tighten the lockdown, which seems to be already working effectively.

If anything, Marasini, the former director at the Epidemiology and Disease Control Division said, by tightening the curbs the authorities have increased the risk of virus transmission.

“There is a high risk of more people getting infected as they will be out to shop in hordes on Thursday also since the government has decided to completely close grocery shops for a week,” said Marasini.