A Happy Reunion Tinged with Sadness 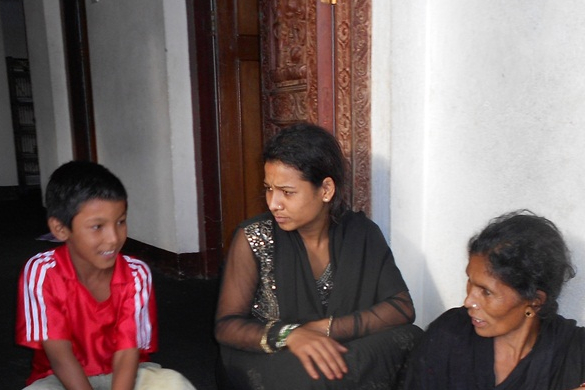 A young boy finds his family—and discovers what he lost.

Sanjay is an 11-year-old boy who was trafficked into an abusive children’s home, Mukti Nepal, at the age of 4. After a blow to the head in a road accident, Sanjay forgot most of his childhood memories, and when he and 19 other children came under NGN’s care, we knew he would be difficult to reconnect to any family members.

A year and a half later, however, all of our interviews, searches, ads and attempts to help Sanjay remember began to bear fruit. A grandmother and a maternal aunt were found living a few miles from where he was staying with NGN and they were so overwhelmed to hear that Sanjay was alive and well they asked to see him immediately.

When the two arrived at NGN’s transit home, they were greeted by an excitable, happy young boy eagerly waiting for them at the gates. There were smiles, hugs and kisses all around. After five years, at last they had finally found each other! But in the midst of the joyful reunion, a sad fact came to light. Sanjay’s grandmother and aunt informed Rupa, NGN’s integration officer, and Devaka, our transit home manager, that Sanjay’s mother and father had passed away years earlier, within months of each other. Even before NGN had begun searching for Sanjay’s parents, he’d lost them.

It was a rare situation for NGN. Most trafficked children who are labeled orphans have at least one living parent still very willing to be a loving caretaker. Rupa and Devaka knew that Sanjay’s reunion had to be handled even more carefully than usual, and using all the tact, compassion and courage they could muster, they told the small boy, so full of smiles, that his mother and father would not be meeting him. He was shocked and heartbroken.

In the time since Sanjay’s first reconnection with his grandmother and aunt in September 2012, NGN has helped him make contact with cousins, a step-father and half-brothers and sisters. They are all delighted to be in each other’s lives once again. But NGN has much to do. Our reintegration team is still assessing an offer of a home and care from his aunt, along with schooling and regular contact with all of his family members. We leave nothing to chance. Every child’s return home is a careful operation that takes many months of preparation and counseling.

Sanjay’s remarkable story is far from over. Right now, though, it is gratifying to know that this boy who had not seen his family for half of his life, is able to say, with a smile on his face, “I can see they love me very much.” We look forward to updating you on Sanjay’s family reunification as it progresses.

NGN could not do this work without the extraordinary support of our donors. If you are inspired by reading this or other of NGN’s Stories from the Field please consider passing this on to friends and family or donating to NGN’s life-changing work.